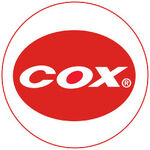 Cox Models, a division of Estes Industries of Penrose, Colorado, USA, is a multimillion-dollar hobby company, is one of the hobby industry's oldest companies and is famous for their line of miniature model engines.

The company, originally named "The L. M. Cox Manufacturing Co, Inc." was founded in 1945 by machinist Roy Cox in Placentia, California. Cox grew up in and around his father's bicycle shop and developed an interest in mechanical devices. Cox's first products were wooden pop guns, produced in his home garage. Cox chose wood since metal was scarce during wartime.

When metal became readily available in the US in 1947, Cox turned his attention to new products, beginning with a diecast metal car. This product was developed into a "whip car", a tethered vehicle which could be manually swung in a circle at a high rate of speed. Nitro- and gasoline-powered tether cars with .60 cubic inch miniature engines capable of speeds of 100 mph (160 km/h) were quickly becoming popular. Cox's first contribution to that growing hobby was a cast aluminum midget racer powered by a .15 engine by Cameron Brothers.

Roy Cox retired in 1969 and sold his company to hobby conglomerate Leisure Dynamics. Kites, toy walkie-talkies and yo-yos were added to the Cox product line. A major step toward participation in the growing radio control hobby happened in 1976 with the acquisition of radio manufacturer Airtronics.

By 1983, Leisure Dynamics was facing bankruptcy. Engineer William Selzer, designer of the "Babe Bee" .049 aircraft engine joined with a local businessman to purchase Cox. The new company, Aeromil Engineering Company, changed the name from Cox Company to Cox Hobbies, Incorporated in 1984. Growth of the company continued, but space became fragmented since the operations were spread out over a number of leased buildings. This prompted a move to a consolidated facility in Corona, California in 1990.

In January 1996, world-leading model rocket manufacturer Estes Industries purchased Cox Hobbies, Incorporated and relocated operations from Southern California to the Estes facility in Penrose, Colorado. This signalled a major change in marketing direction for the new company, now known as Cox Models. A great many new releases were aimed at a mass market and sold in large chain stores and discount stores.

Since then, Cox has returned to its hobby roots and is once again offering its products through hobby stores. The product line now includes a line of radio controlled model aircraft.

This page uses content from the English Wikipedia. The original article was at Cox Models. The list of authors can be seen in the page history. As with the RC wiki, the text of Wikipedia is also available under the GNU Free Documentation License.

Retrieved from "https://radiocontrol.fandom.com/wiki/Cox_Models?oldid=4401"
Community content is available under CC-BY-SA unless otherwise noted.