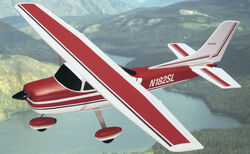 The FlyZone™ Cessna® 182 Skylane® is a beginner- to intermediate-level RTF electric foam park flyer designed, manufactured and distributed by FlyZone, a division of Hobbico, Incorporated of Champaign, Illinois USA.

Introduced in 2006 and officially licensed by Textron Innovations, Incorporated, the parent company of Cessna, the Skylane is based on the three-channel, 27 MHz Sky Pilot RTF. In addition, it is FlyZone's first model to feature discrete, standardized 72 MHz electronics and four-channel operation. Many competing products as well as FlyZone's other offerings feature proprietary electronics and 27 MHz operation. Instead, the Skylane features a preinstalled TACTIC™ TTX400 four-channel FM radio system with six-channel micro-receiver, TACTIC TSC600 15-ampere ESC with low-voltage cutoff and three TACTIC three-wire microservos. Unlike most speed controls which arm only when the throttle is fully off, the TSC600 requires that the throttle lever be moved to full for a count of five and returned to the off position in order to arm. A rare feature in this model's price range is a buddy box system built into the transmitter. The system is compatible only with Futaba and TACTIC brand transmitters and requires the use of the proper Futaba connector cord, sold separately. The transmitter also features servo reversing switches and a charging jack for an optional Futaba nickel cadmium battery pack. Propulsion is via a direct-drive 380-series brushed motor driving an APC-style plastic propeller. Though the motor is a reasonably snug press fit in its cradle, the manufacturer, in an unusual move, uses a pair of rubber bands wrapped around both motor and cradle for added security and, presumably, to prevent breakage to the cradle and/or firewall in the event of a crash. Nylon tie wraps are easily substituted.

Another rarity for a complete RTF in this price range is the fuselage's injection molded foam construction. Similar to the method used by manufacturers such as GWS, UltraFly Model Corporation and Alfa Model, injection molding adds strength, crash resistance and airframe stability. By comparison, a great many products from competitors are constructed of thin, vacuformed foam sheeting with a thin plastic skin, resulting in an airframe which is light in weight but extremely susceptible to damage and subsequently altered flight characteristics. The Skylane's wing and control surfaces are plastic-sheeted foam; the wing is reinforced by plastic struts which triangulate it to the fuselage in the manner of the prototype.

As is the case with most model aircraft in this class, the FlyZone Cessna 182 Skylane is sold as a complete package less 8 AA alkaline batteries for the transmitter. An ElectriFly™ 8.4V, 1100mAh nickel metal hydride seven-cell battery with JST connectors, 12V DC peak detecting charger and spare propeller are included as is a good quality #1 Phillips screwdriver to aid in final assembly. Final assembly is minimal, requiring little more than the attachment of the vertical stabilizer/rudder and the wing. The battery is retained in its compartment by a ventilated cover.

A little underpowered, needs a lot of room for take off. Stalls and spins out of control at slow speed. Not necessarily a beginner aircraft.

A number of individual "likes and dislikes" have been discussed in the forums linked below. Please bear in mind that the following are individual opinions and may not necessarily reflect the facts. "Likes" include:

Retrieved from "https://radiocontrol.fandom.com/wiki/FlyZone_Cessna_182_Skylane?oldid=6986"
Community content is available under CC-BY-SA unless otherwise noted.