Engine tuning is the process of adjusting the carburetor mixture for optimum performance. 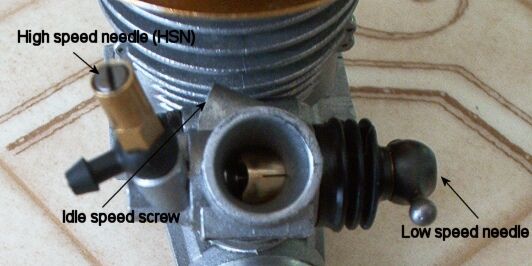 The idle speed is used to adjust the throttle input when the throttle servo is at idle. This should be set low enough to keep the vehicle from moving at idle, but high enough to keep the engine running. When adjusting the idle speed screw, Counter-clockwise closes the carb, therefore decreasing idle speed. Clockwise opens it, therefore increasing idle speed. This should be the last thing set up, but if it's obviously too high, there is nothing wrong with adjusting it while tuning.

To tune the engine, you need to first lean the high speed needle. You should lean it in small increments, 1/16 of a turn, at a time. Lean it, do a few full throttle passes, observe how it is running. If it has a lot of blue smoke, lean it some more. If you have a temp gauge, check the temperature. Continue leaning it like this until you see no improvement in performance, or worse performance. Note the amount of smoke,If you need more smoke then you have at this point. Richen the needle slightly, do a few more passes to verify it's tuned well and not overheating. At this point, your high speed needle should be tuned, and your low speed will still be rich.

Next you will tune the low speed. Do a few high speed passes, bring it in, and let it idle for approximately 10 seconds, and nail the throttle. If it initially accelerated very sluggishly, with a lot of smoke, then lean it 1/16 of a turn, do a few high speed passes, bring it in, idle it again, and nail it again. Continue this process until acceleration is fairly decent, there is some smoke coming out, but not excessively. There also should not be any smoke or liquid fuel coming out of the exhausht at idle. Bring it in, pinch the fuel line near the carb, and count how many seconds it takes to stall, and note how high it revs up. If it takes quite a while, and revs up a lot, then the low speed is still too rich. If it barely revs up, or not at all, and stalls nearly immediately, it is too lean. If it revs up and takes around 4 seconds to stall, then it is good. The low speed should not take very much adjustment, it is much more sensitive then the high speed needle. You should always tune it after the high speed.

You are looking for crisp acceleration and quick puffs of smoke. The RPM range should be smooth and consistent in its rise. Next listen to the engine idle. It should idle high for 3-5 seconds then drop. Keep leaning LSN until the engine can idle for ~10-15 seconds before dropping.. At this point your engine idle will be high. This is fine, as long as it is consistently

An engine's life and performance are both greatly influenced by the tune. The richer an engine the more fuel and therefore the more lubrication your engine recieves, however you will also notice a decrease in performance as it will run sluggish. Running the engine too lean can however cause premature engine wear, because of the lack of lubricant provided by the fuel and excessively high temperatures. The leaner the engine, the less fuel it gets, and therefore less lubrication. Leaning increases the performance to a point. Too lean and the engine will over heat, burn up, and lose performance. Tune your engine based on performance, temperatures, and whether or not you have bluish or whitish smoke at WOT. Never run the engine overly rich to make it "last longer", this can cause underheating and poor performance. Always tune for performance, it's more fun anyway.

Aircraft are tuned a little differently from land vehicles. They are tuned on the ground, and the idle speed is set so that the carburetor is fully closed at "idle". This is so that you can kill the engine remotely, and is done because planes do not have brakes operating on the throttle servo.

This section is a stub. You can help by adding to it.

A temp gauge or gun is a very useful tool. You can use them to make sure your engine is in the proper heat range, but never rely on them. Lots of things can cause inaccurate readings, including ambient temperature, and storing the gauge inside and then using it outside in the winter. Some people try to tune to a specific temperature, this is a very bad idea, as there is no one temperature an engine should run at all the time, for optimum performance. This will at some point cause a lot of completely unneccessary frustration. A temp gauge is only a tool to help keep you from over or under heating your engine.

Some manufacturers claim there is a set overheat temperature, and people have been observed freaking out because the engine is 5 degrees over. While running the engine over a temperature the manufacturer mentions is a bad idea, temp gauge inaccuracies may mean you aren't really exceeding the temperature.

EGT requires a sensor to be mounted in the exhaust system, usually the exhaust header leading to the pipe. That in turn requires an onboard device to store the EGT readings. Probably why EGT is not used in R/C car engine tuning.

EGT has its own deficiencies. The distance of the sensor from the exhaust port matters. The further away, the less reliable the reading as the exhaust quickly cools. Also, EGT works best in real time. The EGT will change quickly from top speed on the track to idle in the pits. A real problem for R/C cars.

Community content is available under CC-BY-SA unless otherwise noted.
Advertisement